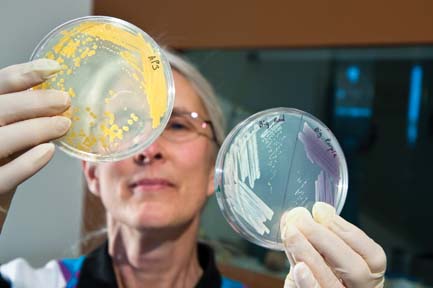 Jo Handelsman Lab — Lynn Williamson –Pigmented, antibiotic-producing bacteria from soil collected on an
island in the Tanana River near Fairbanks, Alaska, a National Science
Foundation Long-Term Ecological Research site. Cold, non-permafrost
soils have not been well studied; thus we predicted that the soil would
be home to previously undescribed microorganisms that might be a source
of medically and industrially useful small molecules and enzymes.
Bacteria from this soil were cultured, and DNA was extracted from the
soil to construct culture-independent large-insert metagenomic
libraries. Both the culture collections and metagenomic libraries were
screened for antibiotic production.